I swear that my first memory of any awareness of this film was a small picture of Billy Warlock in an issue of Smash Hits, totally innocuous, just wearing his high school jacket, smirking a little, an image right out of any tanned, rich Beverly Hills 90210-type show. Yet the accompanying text acted as a warning, saying that Society had something far, far darker lurking underneath the surface, and that it was not for the squeamish. Wary of teen films with a scary edge (I had recently been scared silly by…. The Lost Boys – look, I was nine or ten at the time), I kept a mental note not to go anywhere near this film.

Years later, I would be perusing the latest issue of a monthly film magazine only to encounter an occasional brief mention of Society, sometimes accompanied by an image. One picture I never forgot was an extraordinary shot of a poor man with a hand emerging from his mouth, the scene lit in queasy, sex-dungeon filters. What the fuck was that?? Society soon became a film to be increasingly aware of, wary about and intrigued by, especially given that I had conquered my Lost Boys fear and was gleefully seeking out more and more horror. I finally caught a showing of Brian Yuzna’s classic debut when the cable/satellite channel Bravo was in its second incarnation as a purveyor of depraved, twisted entertainment and showed it one late night. I steeled myself for what looked like one of the freakiest horrors on my to-do list, and unlike other horrors I had heard so much about but was ultimately disappointed by, Society turned out to be totally worth the wait, and in regards to its shock factor, totally, totally bleurgh.

What’s particularly effective about Society is that it doesn’t show its entire hand until the final act – in fact, the slow-burning first hour is remarkably restrained in keeping its ghoulish secrets from us. We know things are off right from the start, given that we start with Bill Whitney (Billy Warlock) telling his psychiatrist about his fears that something’s not right with his life, his family, his world, and that something just horrible is lurking underneath the surface. This point is not too subtly emphasised by he imagining that the apple he’s eating has lots of sticky, dirty worms under the skin. Then there’s those credits, accompanied by a spooky, reworked version of ‘The Eton Boating Song’ over images of…what, exactly? Once you’ve seen the end of the film, it’s obvious what’s happening here (and Arrow’s recent, dazzling release of the film in HD makes it a lot clearer too), but it’s obscure enough just to remain mysteriously unsettling…

So what’s wrong with Bill’s life? Beautiful house, beautiful family, great car, great friends, hot girlfriend….but something’s off. He doesn’t feel like he belongs. There’s distinct alienation from the really cool, rich kids, he’s certain his parents don’t really like him and what’s with his sister? Seriously, there’s accidentally catching a member of your family in your shower, which is bad enough in itself, and then there’s what Bill sees through the frosted shower door glass within the first ten minutes. Things only get weirder from then, with the plot really kicking in when Bill’s friend Blanchard insists he listens to a covertly recorded tape of what happened last night at his sister’s coming-out party. Well, it sounds icky to say the least. In this day and age, it’s all to easy to discover the full extent of Society‘s secrets, but back in those pre-internet days, with just a brief synopsis and a rogue photo still, its horrors were all the more shocking when played out over the film. And I was gripped by the film’s increasingly nightmarish closing in of the walls, where nobody can be trusted and Bill gets to find out what really happens behind closed doors at those swinging high society parties. The final twenty minutes of Society have been justly celebrated as an all-out assault of debauched perversion, and it’s all the more effective given the careful build-up of the first two acts. The ‘surrealistic make-up effects’ by Screaming Mad George are an orgy of twisted, gleefully fucked-up insanity. Given the film was made in the 1980’s, a lot of it still stands up very well. Okay, some of it is all too obviously make-up effects, but the sheer imagination of these horrors keeps it ickily fresh. Along with Rob Bottin’s work on The Thing, Society remains one of the key examples of how the elastic possibilities of make-up effects can be stretched to snapping point.

It’s not all show-and-grue though – the class warfare context gives this film an vicious edge that sadly hasn’t dated. I watch it today and can almost imagine the UK and the world’s upper echelons, the well-born & bred, the privileged, looking down on the regular people with as much disgust as Bill’s parents and contemporaries do, where those not born in the right environment and society are literally fucked over.

Okay, some of the music has dated and a few supporting performances stilted, but Society remains one of the most unforgettable horror experiences of all time and an absolute must for genre fans. As for non-genre fans? You have been warned. Society waits for you…

PS: Amazingly, a look at the BBFC website seems to confirm that Society was re-classified as a ’15’ for its intended BD release on the Second Sight label, though the new Arrow BD retains the original ’18’ certificate. I mean, Society a ’15’? What an age we live in! 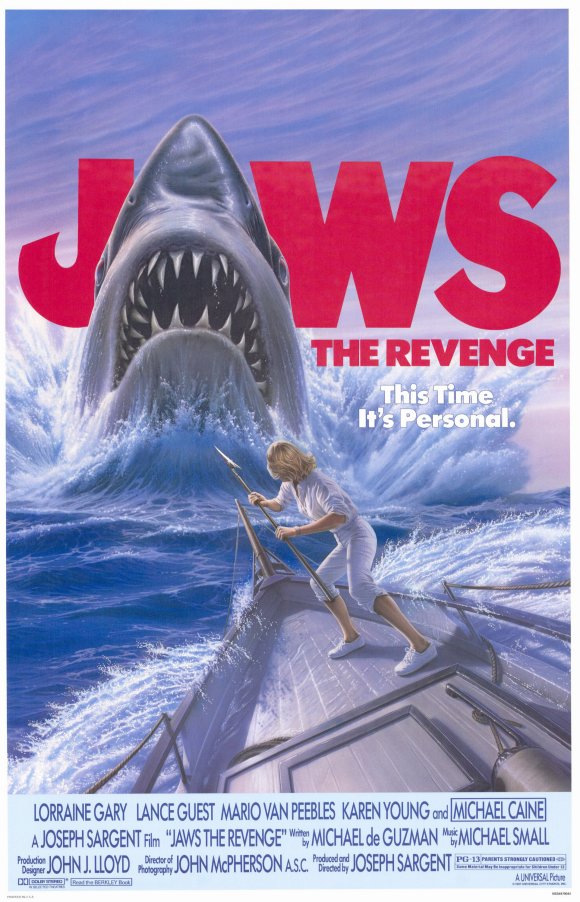 Well, it’s a crap film, isn’t it? For no other reasons than that of continuity, here’s our audio commentary for the pretty bloody awful Jaws the Revenge. We recorded this whilst watching the Region 2 DVD. Click the commentaries link to the right to listen or download for free as an mp3!

Error: Twitter did not respond. Please wait a few minutes and refresh this page.