Hey hey hey flyboys and flygirls! We’ve recorded a commentary for the absolute classic masterpiece that is Dawn of the Dead! We’ve talked over the US theatrical version (the one that’s around 2 hours and 8 minutes) so make sure you cue us up to the right version or we’ll make even less sense than usual! Click the commentaries link to the right to listen or download for free as an mp3!

When I was a wee nipper, I was quite partial to video games. We’re talking the era of the NES, the SNES, the Master System, the Mega Drive. And the Nintendo64, butthat was after the era I’m talking about, so forget I mentioned that. Anyway, these video games had soundtracks. It’s amazing what one’s ears could tolerate back then. Some of those games, which had scores which I found really catchy and entertaining, now feature themes that drill into my head like some kind of burrowing drilling thing. Take Fantasy Zone, the garishly day-glo shoot-em-up for the Master System, which I played a few years ago as a download on the Wii’s Virtual Console. I could only take about five seconds of its soundtrack before I had to slam the mute button. However, some of the scores were quite splendid and have rightfully passed on into cult appreciation. The thing is though, the only way to hear these themes were to, you know, play the game. I remember taking exceptionally slow routes around game levels just so I could hear as much of the theme as possible. Not good for games where you get more points the quicker you clock the level. If I wanted to hear this music outside of an active game console, I had to resort to humming it, which was never a good thing. Still, at least I could replay the level to hear the original.

Yet what about games where there was a cracking theme played out over the end credits? There were some games that had absolutely brilliant closing themes, but the only way to hear them was to play the entire game, and then you could only listen to this fleeting piece of music for as long as the credits lasted, and then it was gone, all gone. Unless you played the whole game again. There were a couple that really won me over – the end credit themes to Super Mario Land for the Game Boy and Sonic the Hedgehog 2 for the Master System, both quite beautiful (well, I thought so at the time) pieces that felt extra bittersweet because the game was over. The absolute best one for me though was the theme that played out over the close of the SNES’ mighty shoot-em-up Starwing (originally titled Starfox in the US), a genuinely state-of-the-art game at the time thanks to the inclusion of the Super FX chip which delivered ace 3D graphics and a genuinely exciting soundtrack. The penultimate theme, played out over the rundown of all the big bad bosses you had just defeated had this almost military percussion, sparkly-twinkly synths and a strangely sad melody that I found quite unbearably moving. Well, I was only a child then. Saying that, I still hear it now and get a little misty-eyed. The theme over the actual end credits even had some rather sweet melodies too, and yet the only way to get to any of this was to get through the entire game, which was no doddle, let me tell you. I was always getting my spaceship shot down. Nowadays there is absolutely no struggle to hear either of these themes or any of the other ones I’ve just mentioned, because I can just go to Youtube and listen to the uploads. But it doesn’t feel like the achievement it felt like back then. No kind of achievement at all, actually.

My love for end credit music stretches all the way to today, by the way, with the most recent example for me being the blockbusting monster that is Grand Theft Auto V, which is personally notable for being the only game released in the last five years that I’ve actually stuck with and played right through to the end. The game itself is different to all the previously mentioned titles in that it has a soundtrack boasting loads of songs rather than only a score, though GTA V‘s score, composed by Tangerine Dream, is pretty special. The end credits to GTA V however, which go on forever incidentally, feature to the best of my recollection a set of songs created specifically for the game. It reminds me of certain films where it seems the end credits went on forever because they managed to cram in about four or five songs over it. Films like Ghostbusters II and Last Action Hero, for example. One of GTA V’s featured songs is by electro-pop dazzlers Neon Indian, a short-but-sweet slice of glittering bliss called ‘Change of Coast’. Now if this was playing over the credits of game from 1992, I’d have had to replay GTA V all over again in order to hear it, all 40 or so hours of it! That’s a lot for just 180 seconds, no matter how good. Okay, I could have turned on the game, get in a car, turn on the radio and wait for it to appear on Radio Mirror Park, but I didn’t even wait that long. Instead, as soon as the game was over, I went online and heard it again. And again. And again. So I suppose it’ll never have the same elusive magic of the closing themes to Starwing, but it’s still fantastic, and here’s why:

1. Like I said it’s only three minutes long, and whenever a song is fantastic, that’s always too short, but any longer and that epheremal magic would kind of be deflated. Three minutes has always been regarded as the ultimate pop song length, and so I can just imagine this existing perfectly within the grooves of a 7” vinyl single.

2. Those synths sound really, really 1980s. The chorus sounds like Crockett and Tubbs’ mixtape opener, playing out as the sun sets over the city. It’s got that ‘Boys of Summer’ breath of fresh air feel about it. The verses sound like they could be played over a montage in a teen romance from ’85, or playing somewhere in the house party scene as our lovable loser hero first steps through the door. The drum intro could almost be ‘Footloose’ or The Cure’s ‘Close to Me’. For some these are not good things. For me they are. The song sounds so ridiculously dated, yet in the absolute best sense. Things like a killer hook never age, even if they do sound oh-so much like a long time ago.

3. Yeah, that chorus – some moments in pop just get to the core of why I love music, and that whole ‘change of coast/change of heart’ vocal delivery, coupled with the adorable synth melody and the way it shifts key halfway through, just creamy dreamy sweet.

4. Structurally it’s a slight tease – verse, chorus, verse, middle-eight, chorus, and that’s it. The conservative in me wants another chorus somewhere in the middle, but the conservative in me is happy enough that this song sounds thirty years old and doesn’t seem to represent any kind of advancement in the timeline of musical progress. Besides, the extra long wait for the second chorus, given extra oomph by how the song’s pulse gets more insistent up until that breakout, only makes it sweeter. Also, it’s not a particularly substantial composition, throwaway even. That only seems to adds to the sheer instant fizz pop appeal of it.

5. Yeah, it just kind of ends. What, that was three minutes already? Yet it’s kind of brilliant, just a swift ending, no mucking about. Put that needle back to the start already.

PS: On Youtube there’s also a fan-made extended version, which does what we all wanted to do and make this song longer. Bravo! 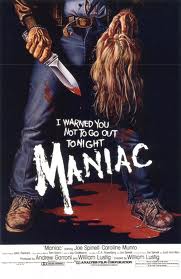 It’s a film called Maniac. It’s about a maniac. At one point there was even going to be a title song, but that never happened, though that song, after some appropriate lyrical changes, became the very same ‘Maniac’ on the soundtrack to Flashdance. The poster features the maniac holding the bloody scalp of a blonde victim, with the tagline ‘I Warned You Not to Go Out Tonight’. Prime video nasty, exploitation, Z-Grade trash material, right? Well, for one thing, despite seemingly containing all the right/wrong ingredients it was never even a classified as a video nasty, mainly because it couldn’t even get a cinema release from the BBFC let alone a home video release. I wasn’t sure what I was expecting – gruesome, unpleasant but shamefully entertaining, I suppose. What really surprised me was how well made Maniac actually is. It’s a good film. It’s an ambitious one too – this is no mere stalk and slash bit of fun. Here we have a killer who we actually see as a person, a real person. As played by the film’s co-writer Joe Spinell, he’s vivid, grotesque but, heavy breathing on the soundtrack excepted, he’s no Jason or Michael Myers. He’s a real person, quite likeable when awkwardly adopting his social persona, and this is what makes the film so disturbing. We’re closer to Psycho/Peeping Tom territory at times, but then just when you think this could be regarded as a serious forerunner to starkly sober, unflinchingly realistic fare like Henry: Portrait of a Serial Killer, we get a moment like the shotgun head explosion, which, as spectacular/horrific as it might be, positions the film closer to the gore-splat horrors of its era. The same goes for the scalping near the start, ghastly and horrible it may be, I couldn’t help but detach myself so as to marvel at the brilliance of Tom Savini’s make-up effects.

The plot is minimal, but the repetition of killings to me mirrors the unbreakable cycle of murder that the killer has trapped himself within. The grimy, frightening nocturne of 70’s/80’s New York is very effectively presented. I think the movies put me off New York for a long time, and no Frank Sinatra sing-a-longs or endings to Ghostbusters II were going to change that. The music is atmospheric, with that 80’s pop staple, the fretless bass, making an appearance. Supporting performances are solid enough, but this Spinell’s show – his is one of the more memorable cinematic monsters from this whole era. Suspense sequences are excellent – one in a subway toilet is unbearably tense, whilst another where Frank insists he’s not going to kill his next victim (the one tied to the bed) whilst gradually descending into paranoia is performed with a hopeless, terrifying inevitability.

The ending takes us inside Frank’s head, with surreal results – we get a rise from the grave straight out of a zombie movie, as well as a brilliant moment where his bespoke mannequins come to life. The very, very end is a mystery – is Frank still alive, or is the final shot just a cheap scare? Seriously, Maniac is well worth watching to decide these things for yourself.

Error: Twitter did not respond. Please wait a few minutes and refresh this page.